Sometimes when we are walking in the streets of the city we see buildings that have a very strange appearance.

The different architecture of these houses, which shows the creativity of their architect and makes us eager to stare at them for a few minutes and even would like to take pictures next to them.

Living in such a city can be very fascinating and exciting.

Although it is difficult to build such buildings, it can help the tourism industry of a city, also the unique view of these structures gives the cities a tourist aspect.

The roulette or spiral building consists of curved walls (roulette) that the space between the curved walls, are used too.

Stairs and elevators for access are also installed in the central shaft of this building.

The structural form of this building is not symmetrical and is inspired by the spiral forms of nature such as galaxies, tornadoes, vortices, conical shells and even human fingerprints.

The circular shapes and curves of this building show the internal structure of the snail’s body.

The curvature of the snail shell follows a mathematical algorithm that is a perfect example of a flawless structure.

This house is a free perception of the world.

Due to its visual appeal, this structure can be used as a hotel, office and commercial building and attract people’s attention.

The engineers of Pasargad Company have set a proud record in the architecture of the building with the unique design of this building and the necessary accesses and suitable skylights. 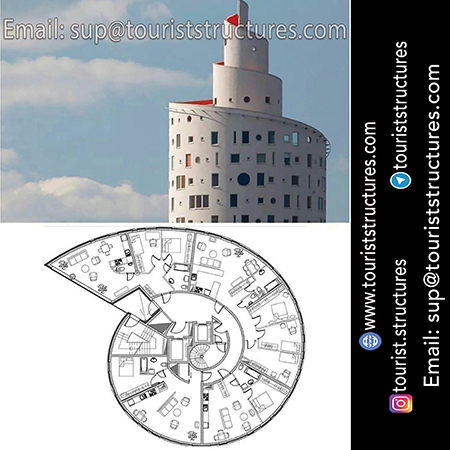 View of the roulette or spiral building and its plan

Pasargad Company is a leading company in the field of design, structural calculations, construction and implementation of roulette or helical buildings, relying on engineering knowledge and world standards.

By selecting any of the green options, you can be directed to the sub-page of this section of the site.